The Pantry – The Making of

On 12 February 2013, the third day of the Chinese New Year, we, the Pantry team, had our wrap dinner. The film had already received over 5000 views on YouTube and that was an occasion to cheer.

The Pantry has a history. On 7 November 2012, Hong Kong lawmakers rejected a motion calling for a public consultation on equal rights for Hong Kong’s LGBT (Lesbian Gay Bisexual Transgender) citizens against discrimination on grounds of sexual orientation.

Under Hong Kong’s legislative system, 35 GC legislators and five FC members are elected by the people while the rest of the 30 FC legislators are returned by members who belong to certain business, professional and other interest groups. For a motion to pass, both constituencies need to have over 50% of support. Traditionally, the President does not vote although it is not a constitutional requirement. – fridae.asia

This was a very disappointing move by the legislators (that voted against/abstained), especially since they draw salaries from the coffers towards which LGBT citizens contribute through taxes of various kinds. On top of that, recent public survey results were heavily in favour of an anti-discrimination law, which meant the legislators went against general public opinion. They quoted the Bible, talked about reverse discrimination and even said the timing wasn’t right. This came from a government that claimed to always listen to the public (and yet denied a public consultation). Apparently, the time is never right for anything related to LGBT in this city. While the rest of the first world races away to recognize LGBT equality rights, the government in Hong Kong, Asia’s world city, is determined to drag its citizens back into caves.

We don’t have the money to lobby for equal rights. But we would be lying if we said we don’t have the will to fight against discrimination. We are creative. We are talented. We are determined. We are not here to tell you what to do; we are here to show you why we need protection. We are here to show you what problems we face every single day of our lives. We are doing this because we believe in love and peace. We want to build a bridge between LGBT and non-LGBT citizens so there is awareness, understanding, love and compassion. The Pantry is the first in a series of films that aim to achieve just that. It focuses on workplace discrimination.

The Pantry took 30 days from conception to production. Although we discussed several approaches, we decided to go for the slightly choppy trailer format. It was within our budget and left us with the option to shoot a feature length if we manage to get sponsors in the future. We made a list of real-life stories, drawn from the lives of people we knew. It was quite a challenge to pick the ones we wanted to show; all of them were touching. Over Christmas and New Year holidays, we worked over the script, got in touch with the actors and the crew. We had set the target release date as 15 January 2013, one day before the Chief Executive’s policy address. This meant we had to shoot no later than 05 January 2013, Saturday, when everybody was available. That also allowed us ten days for editing, music, dubbing and packaging.

None of our preferred locations were free on that day. So we went around scouting for office space in Central and booked one that had a good pantry. A pantry is that part of the office where everybody takes a break, where they can drink coffee/tea and make harmless conversation. It is also a place where people discriminate and discuss discrimination.

There were people from different sexual orientations on the Pantry team. Each one of us brought our unique input/talent towards making the film. We discussed ideas, handling, issues and points of view that opened us up to each other and united us into a family—a family that eats together, cares about each other and stands by each other in good times and bad. Isn’t that how a society should be? 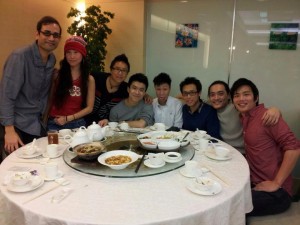