Daryl Sedore’s Paranormal Precognitions was the first book I read on my Kindle. But that’s not the only reason why it shall stay on my mind. 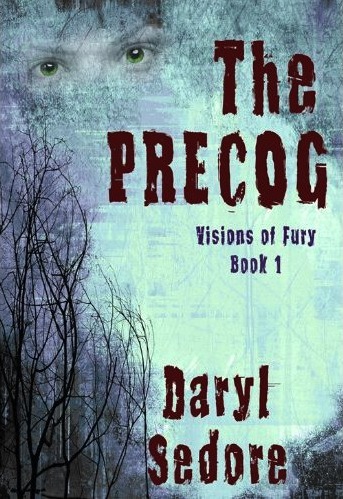 I follow authors, bloggers and literary agents on Twitter and Facebook. Not only do we share our thoughts, ideas, reviews, recommendations and jokes, but also our struggles and success stories. I met Daryl online some time ago and learned about his then upcoming book Paranormal Precognitions. He had set up a Facebook page for others to follow the journey of the book to publication.

The title of the novel was the first thing that caught my attention. My interest in the paranormal is not out of mere curiosity. Back in my high school days, I started having nightmares. I would see bad things happening to people. At first, I thought they were just nightmares and tried to ignore them. But I was scared when bad things did happen to some of those people in real life, on similar lines to what I had seen in my nightmares. Sometimes things would have already happened and I would see them afterwards. I remember calling up mom to talk about one such nightmare. She was surprised and asked me how I knew about the incident, hundreds of miles away from the scene. Remember the pre-Internet, pre-mobile phone days? I am glad she always took me seriously. Sometimes, I reached out to those people myself, and at other times I requested my mom to. We would give them a gentle warning without trying to freak them out. I remember a friend getting pissed off with me after he ignored my warning and met with an accident. The nervous tension after the nightmares wasn’t easy to handle at first, but I have improved over the years.

Sarah Roberts has nobody she can talk to. She has frequent unpredictable blackout periods during which she jots down messages into her notebook. These messages warn her about bad things that are going to happen in the near future. She then follows the instructions, saves the day and runs away before people have time to react. The constant heightened tension makes her pull out her own hair. She masks her mental pain by inducing physical pain.

The book opens right in the middle of one such incident where she is sitting under a bridge with a hammer in her hand. And from there on it is pure action. Daryl’s set the pace by using smaller sentences. One may think smaller sentences mean you have to write more to complete the scene. In reality, the opposite is true. Smaller sentences, especially in fragments, help in increasing the pace of the scene. You end up putting more into the scene for the same length. The only downside to the technique is if one doesn’t slow down the pace every now and then, the reader may feel exhausted. But Daryl’s done a great job at balancing it out by adding small details about the environment. These details are tiny in comparison with the ongoing action but add to the experience.

You end up being in the scene instead of just reading it.

Another thing I liked about this novel is the characterization. Almost all the supporting characters have their own struggles. We don’t usually get to see this, as often as we would want to. The focus is always on the main storyline. This reduces the characters to flat cardboard pieces. Some may argue this adds to the length of the novel. I just want to point out that in the real world no person is a flat cardboard character. At least, I don’t know of any such person. The fact that Daryl’s novel is shorter than your average paperback speaks volumes about how much thought and effort he has put into each character.

I have thoroughly enjoyed reading the Paranormal Precognitions and won’t be surprised if it is adapted into a short film. I have deliberately chosen not to go into details of the story because that would take the fun away from your reading experience. And as a writer, I can’t let happen.

Paranormal Precognitions is available on the Amazon, lulu and smashwords for your reading pleasure.

It’s late in the night. I must go to bed now. By the way, did I tell you I often see dead people in my dreams?